ROCKY WAS THE BEST DOG 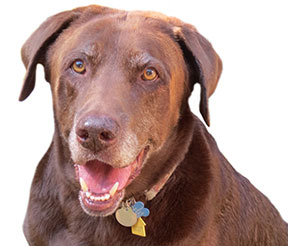 Rocky is the reason my husband and I have adopted so many senior dogs. He was just the greatest dog!

We were cat people, but finally decided we had the time for a dog. When Jenny from Senior Dog Rescue of Oregon (SDRO) found Rocky, a Chocolate Lab, we were thrilled. He looked so sad when we first met him and I wondered, ”Oh my, what have we done?” He had bald spots on his head and body, was sullen, and laid on the deck with his head drooped on his paws. He was 12, but looked 80!

A divorce resulted in Rocky being chained in the backyard for a year. He was surrendered to SDRO when his owner chose a new boyfriend over him.

Early on we discovered Rocky was deaf but being a quick learner he took to doggie sign language like a pro. On our walks he would poke around sniffing the underbrush but he always knew where I was – running back with a smile on his face, tongue lolling, ears flapping! He loved the beach, parks and swimming in the river!

Rocky was a well-trained hunting dog – who knew? In one campground we found a nature trail. When released Rocky twirled around to face me, paws out in front of him, butt in the air, poised as if to say, "Hey come on, come on – let's go find a duck!" Of course, there were no ducks but he was happy to be hunting them none the less.

Many evening when watching TV we'd hear a soft whimper behind us. It was Rocky's way of asking for love, so we'd have a "carpet cuddle." He loved his gorgeous ears rubbed. He loved sleeping at the foot of our bed. He loved his food. He was so loved!

Even though Rocky was only with us for 18 month, it was a wonderful experience – he was such a joy. We've adopted four other great old dogs since, and will continue to – in Rocky's honor. He was the best dog ever!